All along and around the road are major sightseeing attractions.  Both “official” attractions you’ll find listed in the major guides, as well as interesting parts of real Hong Kong life can all be found within a few minutes walk.

Here is a selection of interesting places on or near to  Nathan Road  which are worth visiting.

Located on the site of the former Marine Police HQ this is an interesting mix of real historical buildings, matching faked historical structures, high end shopping and public open space. Visiting it today it is hard to believe that most of what you can see was once below ground level, for today there is an open plaza that was created by removing the small hill which housed the police buildings.  Some of the old structures, and even some of the original trees, were preserved in mid air while the up-market shopping complex was built beneath them.

Today visit the complex to window shop the luxury goods, visit the old historical Signal Tower, or "Round House", from which time signals and other important messages were transmitted to ships in Victoria Harbour up until 1907.

A luxury hotel is located in the original main building of the police station which is called Hullett House. For more information visit their website.

One of the "Grand Old Ladies" of colonial era hotels in Asia the Peninsula as the head hotel of the group which now provides 5 star services around the world.  To enjoy some of the original quality service for which it is famed visit the hotel at the southern tip of Nathan Road, where it turns into Salisbury Road, just to admire the architecture or to shop in one of the luxury shops.

Even better have a very British Afternoon Tea in the Lobby, for which there may be a long queue, but that is because the experience as well as the food and drink are worth waiting for. Or in the driveway of the hotel see one of the many Rolls-Royce cars all painted a distinct dark green, so famous they made it into a James Bond movie!

At the front as is the historic part of the building that dates back to the 1920s while behind is a tall modern tower from the 90s which is topped with a private heli-pad, making it the only hotel in Hong Kong to which you can be whisked by helicopter from the airport!

Originally opposite the piers where cruise ships docked the hotel is now inland due to reclamation, but still has an imposing presence over the harbour with views of the sea and the famed skyline of Hong Kong island.  Today it is just across from the Hong Kong Space Museum described below. 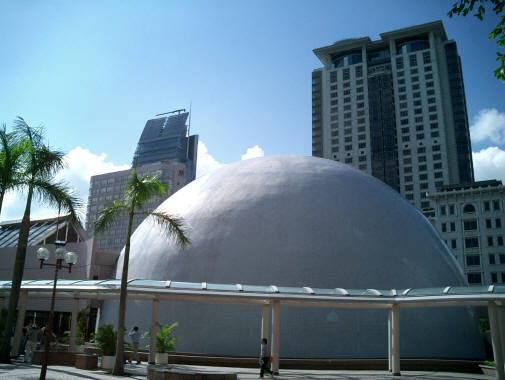 Housed in  in a unique "egg shaped" building the only Space Museum in housing a planetarium, Omnimax Show cinema, permanent space and astronomy exhibition as well as regular themed exhibitions. Open in 1980 it has aged a little but is still worth a visit for anybody, but particularly those with kids who might be interested in space and astronomy. One of the highlights of the permanent exhibition is a partial mock-up of a US Space Shuttle.

At only HK$10 and half for children it is less than the cost of a soft drink and provides at least an hours worth of air-conditioned break from walking along Nathan Road window shopping!

Other sightseeing choices on Nathan Road