How to get to Nathan Road

If you are not staying on the road itself then you may be visiting it as a destination in itself.   Saying how to get there though is misleading as it is a very long road.   Most people however are trying to visit the “Golden Mile” of hotels and tourist shops at the southern end. 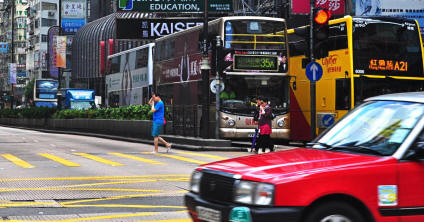 Taking a taxi from the airport at to Nathan Road, presuming the south end where most hotels are, is about 30km but when you add the toll fees and waiting time the total price is around HK$230 for one trip.

If you would like to hire a limo then the on-demand Limo service Uber is available in Hong Kong and you can use their app to book call one.  They have a fixed rate of $500 per trip from the airport to anywhere in Kowloon at the time of writing which is more than a Taxi would cost, but with a limo level of service it is not unreasonable at all and is similar to what small car hire and limo transfer services charge.

Take the wonderful Airport Express train from inside the airport building all the way to Kowloon Station.  That’s two stops on the train, takes only about 20 minutes.  But then it is a bus or taxi from the station to Nathan Road, it is not really walkable.  The train ticket is $90 though buying online gets you a small discount.  But when you add the subsequent bus fee then the Taxi may  become cheaper  if there is more than one of you  travelling  together.  Check with your hotel if they have a shuttle bus from the train station, some do.

Bus is not highly recommended but if you like buses then consider taking the CityBus A21 “Airport Flyer”.  At only HK$33/adult is is certainly a lot cheaper but of course of course slower as it stops many times.  To get to Nathan Road is about 14 stops!  Make sure you know which stop you need to get off!.

It stops outside major hotels and buildings all along Nathan Road. The first stop for the north of Nathan Road is actually just before, outside the Metropark Hotel which is on a side street. Then it goes onto Nathan Road proper and from the Argyle Centre stops  every few blocks along the road. Any destination you need to get to will be within a few minutes walk of one of the stops.

Arriving by ferry from one of the southern Chinese cities at the Hong Kong China Ferry Terminal?  Well then you are right next to Nathan Road and it is a good and interesting walk, you can actually walk through Kowloon Park to get there.  Take the pedestrian bridge into the park and walk downhill all the way to the Park Lane Shoppers Boulevard, which is a row of shops backing onto the park and facing Nathan Road.

When you arrive in the terminal you will be on the second floor, so go up one level following signs for the Royal Pacific hotel to find the pedestrian bridge which crosses the road into the park.  A this point the park is on a rise so the level of the park is the same level as the third level of the building!  Once you are in the park head downhill, follow signs to the swimming pool.  It takes about 15 minutes to walk through park without luggage or stopping at the many interesting sights there.

Alternatively of course you can take a taxi, which is perfectly reasonable if you have a lot of luggage with you, and it will cost you less than $50 to anywhere in the Road from the terminal.

Going to or from Hong Kong's unique Theme Park - Ocean Park - then it is quite a long trip.  From Kowloon through to the south side of Hong Kong island there is no great direct route.  What most local people would do is the MTR to Admiralty, then the 629 bus from there to Ocean Park.  That bus does nothing except go back and forth to the Ocean Park so it is direct, quick and much cheaper than a taxi, however it does get very crowded during summer and vacation times.  The bus is prominently signposted when you leave the Admiralty MTR station if you take Exit B, that's very important as the other exists are nowhere near the bus stop!

A taxi direct there will of course be a simpler ride but will cost $150 depending on exactly where you start, traffic and so on.  Whereas the MTR plus bus will come in under $35 per person, less for children.

Finally as a more scenic route consider walking down Nathan Road, onto the harbour front, then along the Star Ferry, enjoy a leisurely 5 minute cruise across the harbour, then outside the Central Ferry Pier 6 (you will have arrived a the adjacent Pier 7) catch the 629 bus.  The only down side of this is that the 629 buses are less frequent here, every 20 minutes, and may not run during off peak times.

A taxi to the Lower Peak Tram terminus is your best choice, followed by the iconic cable car tram, though you may also take the Star Ferry and then the #15C bus to the lower terminus, or the #15 bus all the way along the winding roads.  This later route is only recommended if you love the views and experiences of winding hillside roads, but generally most people don't like this which is why the Peak Tram was built in the first place over 100 years ago!