As a road packed full of interesting things, going through several districts with different characters, Nathan Road makes a great place to have a walking tour.   And excellent transport facilities mean that returning to your starting point to make the tour into a loop is very easy.

The complete route is about 2 miles, or 3.5km, and would take about 45 minutes if you could walk uninterrupted.   However given the crowds on some parts of the road, and things to see as you walk, allow at least 2 hours for the walking itself plus time for interesting detours, shopping and snacking!

Starting at the southern end of the road in the packed tourist area of Tsim Shau Tsui walk northwards away from the harbour on the left   side of the road.   There are plenty of places to cross the roads but the first few interesting sites are on the left or west side.

As we start the tour facing north with the famous Victoria Harbour behind us we are sandwiched between two major hotels, the one world famous, the other merely excellent.   Yes this is the heart of rich tourist territory, and though some cheaper options are just a few seconds walk away you will not find any shortage of places to spend your money on Nathan Road.

To our left;  The Peninsula Hotel, one of the Grand Dames of the hotel world and certainly the most respected historical hotel on Nathan Road, and some would say in the whole of Hong Kong.   This colonial era styled hotel is actually not that old having opened in 1928.   It is owned privately by the Kadoorie family, one of the old wealthy families of Hong Kong better known to tourists for the Kadoorie Farm which is an interesting education and demonstration farm and botanical gardens in the central New Territories. 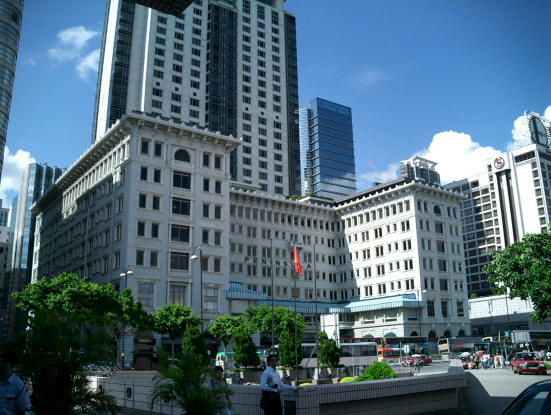 The hotel is the perfect place to experience an English style “Tea” at 4 in the afternoon, which would give a chance to gaze at the interesting interior and lobby.   The traditional accommodations in the from part of the hotel are supplemented by a modern hotel tower at the rear which provides not only more accommodation but a roof type helicopter pad for those in a hurry to get to the airport, the trip takes 7 minutes.

For the budget minded they also offer airport transfers in one of their 14 dark green Rolls-Royce limos, several of which are often parked outside the main doors.

If you have the good fortune to stay at the hotel then you will be joining many illustrious guests, including James Bond in at least two incarnations (Roger More and Pierce Brosnan).

Turning to our right we can see the  Sheraton Hong Kong Hotel, which has been anchoring Nathan Road since the 1960′s.   The external glass walled “Bubble Lifts” were the first in Hong Kong and still offer a great view over the harbour and along the beginning of Nathan Road.   It is home of Morton’s Steakhouse if you feel the need for some hearty USA Beef to keep you going.

The next interesting destination as you walk North along Nathan Road would be  Chung King Mansions, which despite it’s name is a collection of rather run down tower blocks, where you will find cheap guest houses in converted flats.   Perhaps worth a visit for the genuine ethnic eateries in the lower floors were you can get Indian, Pakistani and African food served at very low prices.   For most though a peek inside the door is enough for this famous but uninviting building.   Cluster around outside are a range of electrical goods and makeup shops.   Exceptional caution should be taken making any purchases in these areas.

On safer ground on the other side of the road one block more North is  Kowloon Mosque,  one of the few places of worship along Nathan Road it serves Hong Kong’s Muslim community, particularly that from the Sub-continent.   While visitors are welcome this is not much of a tourist attraction on the inside as despite appearances it is actually a modern building form the 1980s and inside is more of a community center.

Beside the Mosque is the entrance to  Kowloon Park, one of the major urban parks of Hong Kong and one of two near to Nathan Road.   The Park itself is located in the grounds of a former British Army barracks, and some of the old barrack buildings are preserved as the  Hong Kong Heritage Discovery Centre  where you can find photo displays of the various preserved ancient buildings around Hong Kong, particularly those in the New Territories.   This therefore is a good stopping point for an introduction if you are aiming to visit some of the old walled villages in the New Territories at a later date.   The Centre entrance is right next to the Mosque and is free.

St. Andrew’s Church  is something you might miss as you walk along the road as it stands back behind a wall and greenary in a way you won’t see elsewhere on Nathan Road.   As one of the oldest buildings, and the oldest Anglican Church, in Hong Kong it gives a good feeling for the hey day of the British Empire.

The Church is just opposite the northen entrance of Kowloon Park so if you opted to take the detour through the park then you can cross the road and backtrack just a little to visit the Church.

Stop in for a look or visit on of their 4 services on Sunday.   Check their web site for the latest details.

Accross the road the large tower of Tsim Sha Tsui police station looms large. An ugly modern functional building like other new police stations in Hong Kong it is sadly lacking in the character that made the old colonial police buildings so attractive.

The next block takes you into a dence shopping area with the delightfully named Shamrock Hotel. Take a brief detour down Tak Shing street on right to see the Tak Sun Primary School which is typical of the schools in Hong Kong.

Venture a little more down this side street past supermarkets and small shops for local residents and you’ll come to the Kowloon Cricket Club, another hold over from the British days.

The buildings and large grassy fields are not open to the public but if you’d like another break from the traffic of Nathan Road then walk north beside the club grounds along Cox’s road until you meet the main Jordan Road, a left turn here will take you back to Nathan Road at the corner where Shamrock hotel is located.